I had a TIA on June this year

Hi, thanks for accepting me. I had a TIA on 26th June this year, I woke to find one side of my mouth drooping slightly and later noticed it was the one side of my face not just my mouth, I foolishly dismissed this and carried on with my life as normal until 3 days later when a nurse at my GP surgery who was taking routine bloods suggested I be seen by a doctor. My GP told me it looked as if I’d had a stroke and that I needed to be seen urgently by a stroke specialist, he called the hospital in advance of my arrival which was now starting to make me a little concerned. I had ECG, blood tests and various other tests which all appeared ok, a CT scan which showed no bleed on my brain, an ultrasound on the carotid arteries in my neck which showed a mild thickening which appeared to be good news and now await an MRI scan which I’m told will determine any damage. I’m 42 and have an auto immune disorder called Sjögren’s Syndrome which it seems may have been a contributing factor. I’ve literally slept since then, I have no energy and every muscle in my body aches, I’ve struggled to hold conversations or recall information and don’t seem to be able to find the right words. Sentences were jumbled up in the first 2 weeks following the TIA but this seems to be improving. Will my memory and ability to think and make decisions improve? I was hoping after 4 weeks I would have been back to normal but I’m sadly nowhere near.

Jennifer Ackland
6th months later I still can’t find words but not like it was the first few weeks after. Still fatigued but getting better as time goes on. Sometimes I feel like I lose my thought process when making decisions. I don’t know, maybe TIA related or maybe just getting old..haha. Hope things get better for you!

Katherine Mitchell
3-4 months later and I still have problems recalling words and how to say certain things. Sometimes I’m afraid it will happen again.

Barb Saville
It takes daily therapy of working on speech. Thought process seems to continue to be a struggle. At least this is what I’ve seen in my Mom….daily reading out loud, working puzzles, talking with someone. But thoughts still jumble. Keep at it 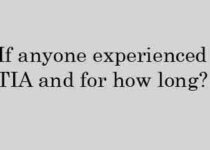 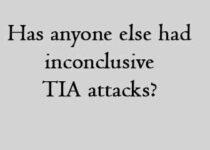 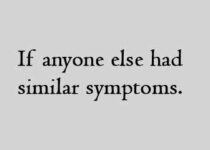