‘What is the Most Common Mode of Inheritance for Glycogen Storage Diseases?’ If this is a question you have ever asked yourself, you’re in luck.

Glycogen storage diseases (GSDs) are a group of inherited metabolic disorders that impair the body’s ability to process glucose. Glucose is a lump of sugar used by the body for energy. It is stored mainly in the liver and muscles as glycogen, which is broken down during physical activity, such as exercise.

The most common mode of inheritance for glycogen storage diseases involves autosomal recessive inheritance: if both parents are carriers of an abnormal gene, each child has a 25% chance of inheriting two copies of that gene and developing GSD.

The name comes from “autosomal,” meaning that it’s not sex-linked, and “recessive,” which means that the gene is not expressed unless both parents pass on a copy of it to their child (they’re both carriers).

Inheriting a disease from both parents is called autosomal recessive inheritance. In this type of inheritance, the trait or gene will not show up in the child unless both parents have it, and neither parent has any dominant traits.

Glycogen storage diseases are diseases that can cause damage to your liver, kidneys, muscles and brain due to an inability to break down glycogen. Glycogen is a type of sugar stored in your body during periods when you don’t eat much food.

Let’s say that two parents have a child who has been diagnosed with type 1 glycogen storage disease (we’ll call her Sally). Sally has one copy of the gene that causes this disease from each parent, so she can’t help but get sick if she lives long enough. Her mother has no copies of this gene, but her father has one copy.

This means that there are three possible combinations:

1) Normal parent + normal child (no copies of the gene)

The first combination is what we’d call a “normal” situation no one in this family has any copies of the gene causing glycogen storage disease, so they’re all healthy. The second combination is called autosomal recessive inheritance. 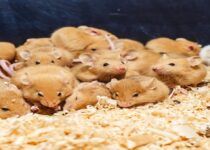